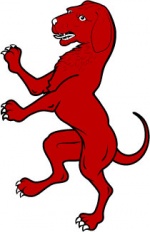 The dog is a quadruped mammal, almost certainly descended from the same root-stock as the visually-similar wolf. Together with the cat, it became, during pre-history, the main domesticated species in Europe. It hunted and herded for man, guarded his homes, was used as a pack animal, put in wheels to turn meat in the kitchen, pulled carts and used as sport in bear and bull baiting, food (in times of famine in Europe) and (on occasions) was trained to fight in his wars. In Japan they were also used as archery targets. The cat, on the other hand, killed mice, drank milk, and looked elegant.