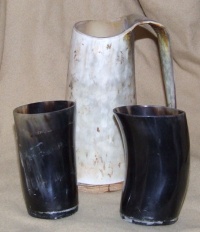 A tankard is a heavy mug, usually made of wood,pottery, leather, horn or metal (with the latter being rarer the further back in history one goes), typically with a sturdy handle and a base wider than the mouth, for added stability.

In the early 16th century parts of Germany passed laws requiring that all food and beverage containers had to be covered to protect against insects. This was achieved by adding a hinged lid with a thumblift.

Modern pewter or aluminum tankards with glass bottoms are very common, but not period. The practice of making tankards with glass bottoms dates from the 18th century, when English and American sailors would be wary of "press gangs"; groups of men who would (on government orders) literally kidnap men to serve on ships of the Royal Navy, especially during the Napolenoic Wars. A sailor on leave would carry a chit showing that he was already a crew member of a given ship, and therefore not eligible for impressment in another vessel. Some of the more subtle press officers would randomly drop chits in assorted tankards, then round up "their" sailors and take them "back to the ship". A common practice by deserters would be to drop their chits in other men's drinks and then quietly disappear, leaving the hapless stranger stuck with a place aboard ship.

Tankards in the SCA

Tankards are quite common at SCA events, owing to their inexpensive nature; in North America tankards can be purchased at most Goodwill or Value Village stores for less than a dollar a piece. Tankards were certainly used in period and look medjeeval enough that many in the SCA use them enthusiastically.