Difference between revisions of "Eleanor of Castile" 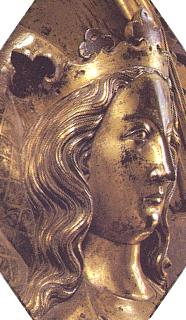 Eleanor of Castile (1244-1290) was the first queen consort of Edward I of England. Eleanor was born in Castile, Spain, the daughter of Ferdinand III, King of Castile and Leon. Her given name was Leonor (she was called Eleanor in England). She married Edward, the son of Henry III of England, in October 1254 at Burgos and became queen in 1272 when his father died and he became king. Theirs was one of the most successful royal marriages of all time, and she often accompanied her husband on his military campaigns, giving birth to his fourth son (later King Edward II of England) at Caernarfon in 1284, immediately after the conquest of Wales. She gave birth to sixteen children all told, six of whom survived into adulthood, but only two or three of whom outlived their parents.

Eleanor died on November 28, 1290, at Nottingham (believed actually Harby, Nottinghamshire rather than the city), and her body was returned to London for burial at Westminster Abbey. Such was Edward's devotion to her that he erected memorial crosses at each overnight stop. Three of these "Eleanor crosses" are still landmarks today, although the most famous at Charing Cross (from which its name derives) is a copy. He did not remarry for nine years, to Margaret of France, in 1299.

Children of Queen Eleanor and King Edward I :