College of St Basil the Great

The College of St Basil the Great is the name of the SCA group at the University of Western Australia in Perth, Australia. The College is part of the Barony of Aneala in the Kingdom of Lochac. It was started in A.S. XXXVI (2001) and currently has about 30 members. Within the University it is sometimes called the UWASCA or the UWA Medieval Society.

The current seneschal is Sivaroobini Kalaimani (Roobi), however due to extended absence Jacques currently holds the position.

The proposed device is: 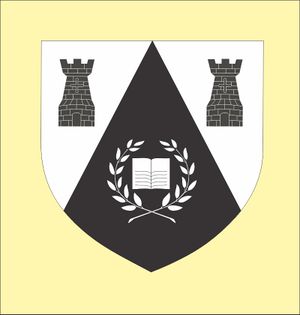 Their battle cry is "Boom Boom", a pun on Basil Brush, a fox of impeccable humour. There are also references to crossed cannons (for the same fox), a broken tower (referring to Faulty Towers) and the motto "discere, vel mori" which translates to "Learn or Die".

The College of St Basil the Great was initially formed by Jochen Schwalbe in A.S. XXXVI. The list of Senechals are:

There is a long History of Devices which is really worth reading when someone writes it.

A night of feasting and making merry to welcome the new members of the College and Barony.

Every year the glorious College of St Basil the Great challenges the Barony of Aneala to hold the field in rapier and heavy combat. The tourney is held towards the end of semester two.

Parts of this page may have been copied from the college's webpage.