The carrot is a vegetable that grows as a conical root in the ground, from which grows a green, leafy stalk. Carrots should not be eaten when still green (unripe). Various alcoholic beverages can also be made from carrots, but it isn't recommended.

"They (carrots) remain in the human bile gland awaiting a time to be thrown up. Not a nice vege at all." 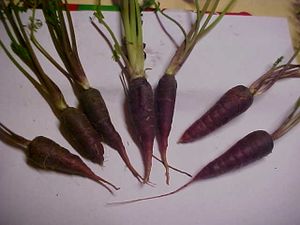 While modern carrots are almost all orange, this is a relatively recent occurrence, with orange carrots first appearing in the Netherlands during the 16th century. Prior to this carrots ranged in colour from red, purple and yellow to white. Carrots originate from the region around Afghanistan and Pakistan, a region still considered to be a center for carrot diversity. By Roman times carrots had arrived in the eastern Mediterranean and in Italy and Greece after moving through the Middle East. Dioscorides mentions two types of carrots in his Materia Medica, a wild white rooted type and a domesticated type. With the collapse of the Roman Empire carrot movement west stalled however with advent of Islamic expansion carrots moved through North Africa into Spain and then into Northern Europe. In the 14th century carrots are mentioned in the "Le Ménagier de Paris" as being red roots sold at the markets. While orange varieties are currently the most common it is still possible to obtain older varieties which approximate medieval varieties. Some of these varieties are, Purple Dragon (or just Dragon), Cosmic purple, Lubyana, a Slovenian yellow heirloom variety and Flemish white. Try heirloom seed suppliers when looking for these varieties. Taste of old varieties is similar however yellow carrots appear to have a coarser texture making them very well suited to stewing. Various other medieval names exist for carrots, or that include carrots, e.g. pasternakes (carrots or parsnip). Carrots were eaten raw or cooked in medieval times.

Carrots in the SCA

While cloved carrots have been seen around the place, carrots are most often associated with St Ursula, a tradition that dates back a few years to when the combined forces of St Ursula turned up to the Rowany Festival with (almost) nothing to eat but that noble root. Carrots have since featured in the mythology of that college - St Ursula's carrot wallop should probably be avoided, depending on your need for alcohol.