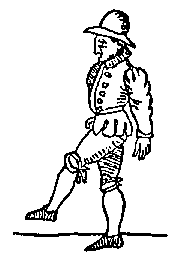 The Pied en l'air gauche is the position in which a left foot kick is finished as described by Thoinot Arbeau in Orchesography. Pictured is the higher position of a left foot kick, sometimes differentiated as grève droite; Arbeau states that in the Pied en l'air gauche the foot barely leaves the ground, and only goes a bit forward (or else not at all) while the grève droite is a much higher kick. It is not known which pieds en l'air are supposed to be done without the foot going forward, so in general "kick" is not an entirely satisfactory translation.

In addition being done by itself, it is also a component of some steps such as the Burgundian Double Right.