Difference between revisions of "Order of the Yew Bow" 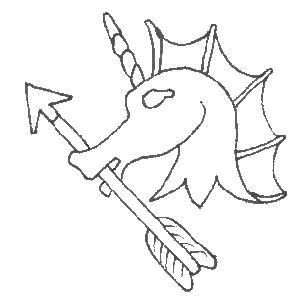 The Order of the Yew Bow is an SCA kingdom level award of High Merit in Atlantia.

It honors and recognizes those subjects who have distinguished themselves by their excellence with bow and arrow (both target and combat), thrown weapons, or siegecraft. In November 1993, the former Order of the King's Missiliers, for combat archery, and the former Order of the Nimrod, for target archery, were closed, and their recipients were considered recipients of the new (now former) Award of Yew and Sinew. The award was later renamed the Yew Bow. The award was closed and the order created as an AoA level, polling order on January 1, 2002.

All recipients of the former Award of the Yew Bow are considered to be members of this order. As of April 1, 2003, the Yew Bow became a GoA level polling order, and was expanded from just archery to include siege and thrown weapons. The first to receive this accolade at the hands of TRM Baudoin and Caterina were Randall Arrowsmith (under the name Order of the King's Missiliers) and Aelfred of Cres (under the name Order of the Nimrod) on October 3, 1987.