The use of colored glass to imitate gemstones dates back to ancient times. For small jewels this can be very effective. For larger gemstones glass may be too clear, and lacks the inclusions found in natural stones. Also, be cautioned that a lot of costume jewelry is made from acrylic not glass. Volcanic glass, a man-made substance from obsidian and volcanic ash, is a possible candidate for imitation aquamarine and pale sapphire.
Photos: ceramic scarabs [dead link], glass drop "emeralds" [1] foil-back glass rhinestones [2]

Most inexpensive jewelry on the market uses synthetic rather than natural gemstones. These fall into two categories: Laboratory synthetics are exact duplicates of natural minerals. The only difference is that the stone lacks the inclusions and imperfections found in nature. Synthetic imitations are also grown in the lab, but are of a different chemical composition than the natural stone, and are usually cheaper as well. When using synthetic stones one should remember that most medieval jewels were cut as cabochons. A facetted gemstone would look out of place on a Viking warrior. (Note, however, that crude faceted beads have been found in Viking treasure hordes.)
Photos: lab-grown opals [3] synthetic blue spinel [4] cubic zirconia [5] & [6] 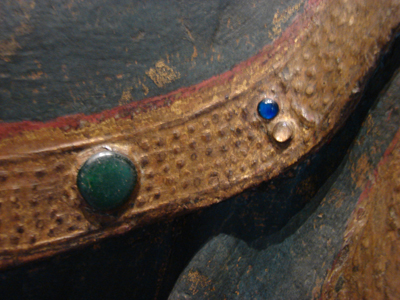