Difference between revisions of "Garlic" 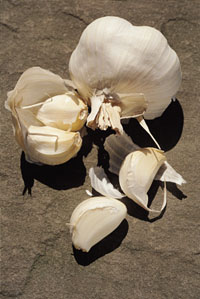 Relative of the onion, it has been widely cultivated over the centuries to the point where it's difficult to pinpoint its origin. Its leaves look a lot like grass, and the flowers are a whitish colour and are grouped together. The segmented bulb is the only part of the plant used. The plant grows best in almost any soil, although preference is given to damp, sandy soils in full sun. Cultivation should take place in late winter.

It has both medicinal and cullinary uses. It has been used to prevent colds and as an antiseptic. I think most people can recognise its distinctive smell and flavour.

It's also believed to deter vampires.