From the Forme of Cury. 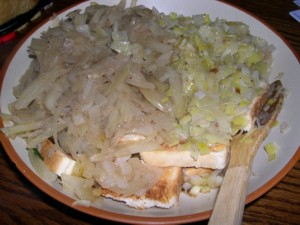 Note: I actually served this like a sops over toast - works quite well with teamed with the Slete Soppes.

This dish kept warm well and didn't soften or taste worse in a ceramic container for over 1/2 an hour. The boiling approach seemed quicker and easier to do on a large scale where water could be boiled in advance (yes I'm thinking of a feast kitchen or over an open fire). The taste of the dish didn't seem to suffer for the lack of oil, nor the more vigourous cooking. I chopped my onion only slightly finer than the fennel, but the onion cooked more slowly, hence I think I know why the recipe calls for minced onion and large pieces of fennel. The spices stick well to the fennel if added just after draining.

The historical version of this recipe was taken from the Project Gutenberg e-text of the Forme of Cury.