Difference between revisions of "Ermine" 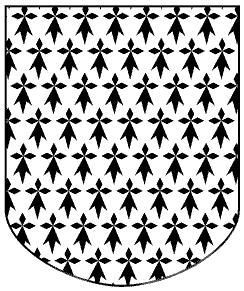 One of the furs used as a tincture (colour) in heraldry. It consists of black (sable) ermine spots on a white (argent) field.

The inverse (white on black) is called counter-ermine or ermines.

The ermine or short-tailed weasel, whose skins are represented by the heraldic tincture (the black spots representing either the little legs and feet, or the black-ended tail), lives in cold regions of North America and Europe. They measure about 10" plus about a 3" tail. They are yellow-brown most of the year but grow a snow-white coat in winter. Their skins were prized as clothing decoration.

They should not be confused with the similar creature on the Discworld, the vermine, a small black and white relative of the lemming, whose skin is also highly valued, not least by the vermine itself, which will do almost anything to keep possession of it.