A torc, also spelled torq or torque, is a rigid circular neck ring or necklace that is open-ended at the front. 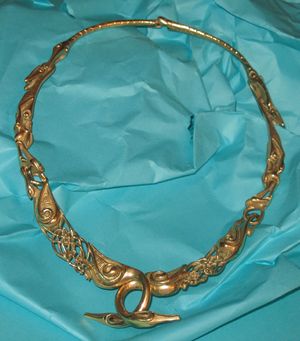 Torcs are a type of Scythian, Thracian and Celtic jewellery, produced in the European Iron Age, from circa the 8th century BC to the 3rd century AD.

The word comes from Latin torques, from torqueo, to twist, because of the twisted shape of the collar. The ends of ancient torcs typically bore sculpted ornaments, frequently globes, cubes, or animal heads, and, less commonly, human figures. The body of the necklace was usually but not always wrapped. Although they were most often neck-rings, there were also bracelets with this shape. Torcs were made from intertwined metal strands, usually gold or bronze, less often silver.

The Celtic torc disappears in the migration period, but Viking Age metal necklaces are sometimes also referred to as "torcs".Jim Cornish, Elementary: Viking Hoards, on the Centre for Distance Learning & Innovation Website

The torc first appears in Scythian art, from the Early Iron Age, introduced to Celtic Europe around 500 BC (see also Thraco-Cimmerian).

One of the earliest known depictions of a torc can be found on the Warrior of Hirschlanden (6th century BC).

Depictions of the gods and goddesses of Celtic mythology frequently show them wearing torcs. The famous Roman copy of the original Greek sculpture The Dying Gaul depicts a wounded Gallic warrior naked except for a torc. Examples have been discovered in Britain and Europe during archaeological surveys.Roman Silver Torque with Two Roman Denarii Pendants (late I–III c. A.D.), on Ancient Touch Website A 1st century BC example is the Snettisham Torc found in southwestern Norfolk.

It was said by some authors that the torc was an ornament for women until the 4th century BC, when it became an attribute of warriors. An example of a torc owned by a woman is the gold torc from the La Tene period chariot burial of a princess, found in Waldalgesheim, Germany, and another found in a woman's grave at Reinheim. Another La Tene example was found as part of a hoard buried near Erstfeld.Iron Age Western Europe from c. 800 B.C. - La Tène, on the Images from World History Website The famous heavy silver "bull torc" found in Trichtingen, Germany, dates to the 2nd century BC.

The torc was a sign of nobility and high social status: a decoration awarded to warriors for their deeds in battle, as well as a divine attribute, since some depictions of Celtic gods wear one or more torcs. Images of the god Cernunnos wearing one torc around his neck, with torcs hanging from his antlers or held in his hand, have been found.

The Roman consul Titus Manlius in the 361s BC challenged a Gaul to single combat and killed him, and then took his torc. Because he always wore it, he received the nickname Torquatus (the one who wears a torc). After this, Romans adopted the torc as a decoration for distinguished soldiers and elite units during Republican times.

The hippie movement of the 1960s and 1970s brought torcs back into fashion, not only as necklaces and bracelets, but also as rings. Torc-shaped bracelets are commonly worn today by both men and women.

The torc is also the symbol of someone with the title of Saoi, which is the highest honour Aosdána, the Irish organization of artists, can bestow upon its members.