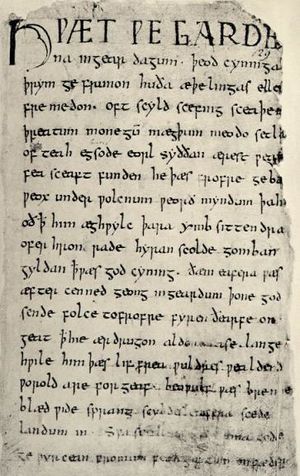 The first page of Beowulf

The original Beowulf manuscript now forms part of Britsh Library MS Cotton Vitellius A XV. Its earliest history is unknown, but in the 16th century it came into the hands of antiquarian Laurence Nowell, who wrote his name in it and wrote the year 1563. It then found its way into the Cotton Library and in the 17th century was bound with a 12th century collection of Old English prose. During the 18th century the manuscript was almost destroyed by fire.

The manuscript dates from the 10th century. It begins with three prose works: A tale of St. Christopher, Wonders of the East and a translation from Latin of a Letter from Alexander to Aristotle. Next comes the poem Beowulf, followed by a fragment of the poem Judith. Two scribes have been identified, the first having written everything up to part way through line 1939 of Beowulf, the second taking up from line 1939 and having written Judith as well.