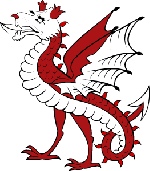 Many people have a wyvern as part of a device and it was seen fairly often in medieval heraldry, where it is often refered to as a dragon.