One of the furs used as a tincture (colour) in heraldry. It's a hard-to-describe regular pattern of blue (azure) and white (argent). The pattern is supposed to resemble squirrel pelts sewn together in alternating colors. It is found in a variety of colours, and appears in different arrangements, each with its own name. 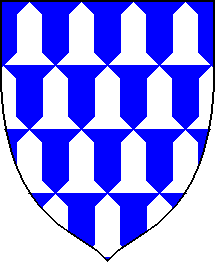 It goes back, as does ermine, to a fur highly prized by the potentates of the Middle Ages. The word vair is derived from the Middle English forms veir and vair�, meaning variegated fur (from the French vair, itself from the Latin varius, variegated).

The squirrel in question was apparently blue-grey on the back and white underneath, and was much used for the lining of cloaks. It was sewn together in alternating cup-shaped pieces of back and stomach fur, resulting in a pattern of grey-blue and grey-white which, when simplified in heraldic drawing and painting, became blue and white in alternating pieces. The species involved has never been accurately identified.

In the oldest records vair is represented by means of straight horizontal lines alternating with vertical wavy or nebuly lines (sometimes blazoned as vair ond� or vair ancien).

In the Cinderella fairy tale, the slippers were of glass, but some 19th century French writers thought it was a mistake and there were supposed to be made of vair ("verre", glass, is a paronym). Fact is slippers are really made of glass, not of vair. Disney has it true.