Difference between revisions of "User:Sg647112c" 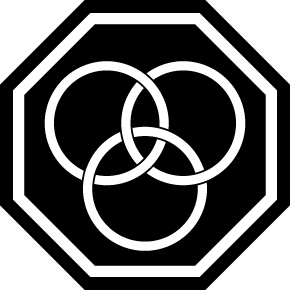 The mon-inspired heraldic badge assumed by Brother Dair during his time in Japan.
An octagon sable charged with three annulets interlaced two over one within an orle argent

Brother Dair, a Benedictine monk, was born in the village of Roghadal in the once-Norse Outer Hebrides of Harpelestane Shire. His Gàidhlig (Scottish Gaelic) birth name is Þórmóðr Clainn mhic Leòid na Hearaidh, which roughly translates as “Tormod, of the Clan MacLeod, of the Isle of Harris.”

Because of the moral resolve that he showed as a youth, he picked up the nickname Diar which means “oak tree” in his native tongue – by which he is almost exclusively known today. He became a novice at a nearby monastery at a very young age. Excelling in academia, the Right Reverend Abbot Chliamann (Clement) sent him to study in Rome with a sealed letter addressed to HH Pope Martinus III (formerly Archbishop of Venice), describing Brother Dair as a Homo Universalis.

His studies eventually took him from Rome to Japan, with a group of Portuguese Jesuit missionaries, where he was a personal guest in the household of Soga no Takashi, Ō-omi (the Lord Chamberlain) of the Kōshitsu (the Imperial Family of Japan), from whom he learned much during his several-year stay.

As a learned monk, Brother Dair’s travels have taken him throughout the known world. More recently, he has lived in Tirnewydd Marche (AS 13-32), Black Diamond Barony (AS 32-36), and presently resides in Quintavia Shire (since AS 36).

In his home of Quintavia, he is referred to as the Dandelion Pursuivant of Arms Extraordinary in recognition of the assistance he gives to the Shire’s Milestone Pursuivant of Arms in Ordinary, and occasionally to the East Kingdom’s Brigantia Herald of Arms. However, his solemn vow of obedience to the Church forbids him from accepting such an earthly title and he never refers to himself in that way.

Also of note, it is rumored that Brother Dair is skilled in some form of martial art. It is not known if this is from his upbringing in Scotland or from the years that he spent in Japan, but stories persist of him once immobilizing three armed world-be attackers single-handedly. Brother Dair does not speak of this.