Fulk de Toron lives in the Canton of Petrea Thule in Ealdormere, where he serves as Arts and Sciences Officer.

He is a former member of House Rougeabeille (as Paul de Trois-Frontières) and the primary author of the Rougeabeille Chronicle, a psuedo-medieval history of the House and the Shire of Trinovantia Nova. He maintains a keen interest in the history and development of the Society for Creative Anachronism itself, in particular that of the Kingdom of Ealdormere, and delights in Inter-Kingdom Anthropology.

His badge is: vert, a maunche argent. 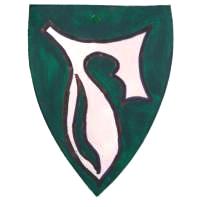 Mundanely, Paul Matisz is a recent baccalaureate of Trent University with a double major in Ancient Greek and Roman Literature and English Literature.