Difference between revisions of "Unicorn" 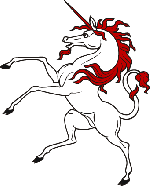 The unicorn is a heraldic beast with a horse's body, a single long horn, a lion's tail, tufted hocks and cloven hoofs like a goat, and a beard.

In medieval legend its horn was said to be able both to detect and to neutralise poison (although to do this it had to be removed from the unicorn) and the spiral horns of narwhal were often sold for this purpose, as well as ordinary horns cunningly carved. The unicorn was said to shun all vice, and therefore to be best captured by placing a virgin in the forest, when it would sense her, approach her, and lay its head in her lap. The catch was that, if she wasn't, it set aside for the moment its vegetarian diet, and ate her alive.