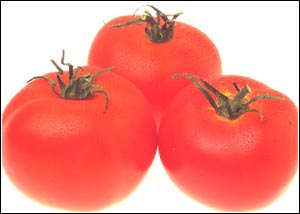 The tomato is a plant with juicy red fruit; technically a relative of the apple and therefore a fruit, rather than a vegetable.

The origin of the word "tomato" is Latin for 'juicy wolf peach' because they were believed to evoke werewolves, and were initially believed to be poisonous (and despite being proven otherwise, some people like to hold onto the belief that they are still poisonous to avoid eating them... unless they're made into a sauce). They only became popular in the early 1820s after it was discovered they weren't poisonous, and became exceptionally popular in the 1920s when they became widely cultivated.

If, for some bizarre reason, you want to grow tomatoes, they're apparently fairly easy to cultivate. You can readily buy seeds and seedlings from the supermarket or hardware store, and you should plant them in full sun so they get plenty of water. You may have to fight a number of tomato problems such as anthracnose, bacterial canker, black mould, curly top, early blight, root rot, powdery mildew, southern blight, infectious chlorosis virus, tomato pith necrosis, water mould, white mould.