Difference between revisions of "Tabard" 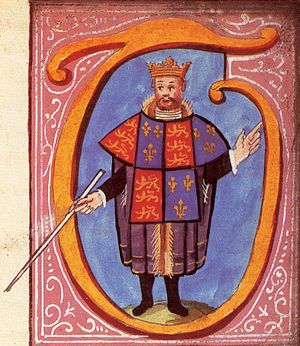 Example of a tabard on Thomas Hawley, Clarenceux King of Arms (1556)

A tabard is a simple covering worn over armour (in period, usually maille armour) originally to protect it from heating up in the harsh Middle Eastern sunlight of the First Crusade. It quickly became decorated with embroidery and heraldic display. It is important to note that as period heraldic custom evolved, it became common that only those in the employ of an armiger (or the armiger himself) would bear that individual's arms on a tabard. For example, only a herald working in service to his king or the king himself should bear his kingdom's arms on a tabard. This custom in SCA employ varies from kingdom to kingdom (see below).

The construction of a tabard is relatively simple. Most designs start with a cloth rectangle, a hole removed from the center for the neck. Depending on the time and place of the design, the design may take on a more square appearance, may be longer or shorter, or may flare at the bottom (into more of a trapezoid shape). In many instances, there are additional rectangles added at the shoulders to form open sleeves. Tabard sleeves normally have smaller replication of the design on the main part of the tabard. A tabard can be worn belted or unbelted or may be tied at the sides.

The surcoat was a more elaborate adaptation of the tabard, and dates from later in period.

Tabards in the SCA

In the SCA tabards are commonly worn over armour in the field or over garb of it. In both cases, they are used as heraldic displays. In the Kingdom of Ealdormere, for example, heralds and guards who attend on the crown wear tabards bearing the kingdom arms. Because of the ease of construction, many fighters own several tabards. Those bearing the arms of their barony or kingdom are worn when at war, and those bearing personal or household heraldic displays are worn at tourneys. However, some kingdoms recommend or require that only populace badges be displayed on the tabard of a fighter or individual wishing to represent his kingdom in non-heraldic capacities. The Kingdom of Meridies, for example, encourages the fighting populace to wear a specific design of tabard incorporating one of the populace badges, but discourages the use of the kingdom arms on a tabard for anyone who is not acting as a herald (or is not the king himself). This may stem from the restriction of wearing a laurel wreath or crown when the right to wear one or both has not been given through award or title.

In A.S. XL, King Aaron of Ealdormere issued a request at his coronation to the Fighting Households of Ealdormere, encouraging them to make and wear tabards bearing the Kingdom's arms in time for the Pennsic War.