This weapon is used in many modern styles of martial arts, although this weapon is rarely seen in SCA combat because it doesn't have any particular function in that style of fighting. The Sai is a fork-like weapon, about 15 - 20 inches (40 - 50cm) long, usually weighing about 3lb/1.3kg. It's believed to have been a farmer's tool used for planting, somewhat like a pitchfork, and has documented use in Okinawa, India, China, Malaysia, and Indonesia as a weapon. 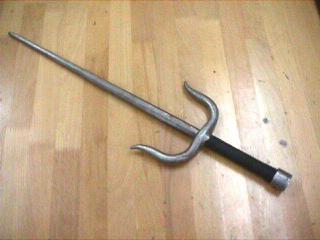