Difference between revisions of "Rapier" 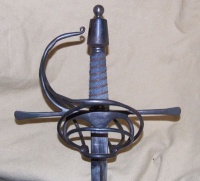 A rapier is a slender, sharply pointed, two-edged sword with a blade at least 90 centimetres in length and generally possessing both distal and profile taper, often sporting an elaborate hilt and hand-guard. The SCA uses reproduction rapiers in "heavy rapier" fencing.

The rapier developed in the second half of the 16th century as a modification of what is now known as the "cut-and-thrust" style sword. It was slimmer and nimbler than the thrusting broadsword, a feature that enabled it to grow longer, and increased the usefulness of thrusting attacks thanks to its reach.

The rapier became popular in Europe in the 16th century primarily as a weapon for civilian use. In parallel to the rapier, other weapons were developed for use in war in response to the increasing protection offered by fully articulated plate armour. These included the estoc and many speciality polearms-- such as the later versions of halberd.

During the 17th century the cup hilt was added to the rapier giving the hand increased protection again thrusts.

The rapier is capable of both slashing and thrusting attacks, but the style of fighting popular during its advent and heyday favoured the thrusting attacks we popularly associate with "fencing". The rapier is the sword most often associated with the duels of honour depicted in literature and movies, such as The Three Musketeers.

The rapier eventually evolved into the smallsword, reproduced using its descendant, the modern foil.

For a more detailed explanation of the primary use of the rapier-- Dueling-- see European dueling sword.

For a thorough and somewhat technical discusion of the rapier see:

Rapiers in the SCA

In the SCA, the term 'rapier' is often used instead of 'fencing' to refer to the combat activity using such a weapon. In those kingdoms that utilize both epees and rapiers, they are respectively called "light" rapier refering to foil or epee and "heavy" rapier refering to reproduction rapiers or schlagers and on a limited basis back and side sword. In Lochac, 'rapier' also refers to the in-house fibreglass blades.