Difference between revisions of "Principality of Insulae Draconis" 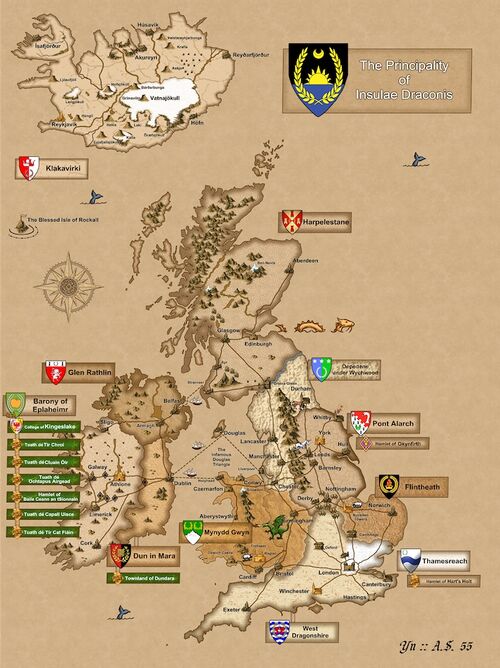 Map of Insulae Draconis by Master Yannick of Normandy

After many long years of attempting to unite themselves under a single name and banner, these 11 groups were granted the right to form a Crown Principality in June 2003.

In November 2003 Sir Michael de Brad travelled from the noble Shire of Harpelestane and became the first Viceroy with Duchessa Alessandra Melusine Mantegna as his Vicereine.

As of 2008 (A.S. XLIII), the Crown Principality began the process of becoming a Principality. At Battle of Brothers in the Shire of Flintheath, on July 18th 2009 (A.S. XLIV), it was announced that the Board of Directors had approved Insulae Draconis's submission to become a full principality. The last viceregal tourney was held at Ffair Rhaglan, in August, with the first coronet tourney being held in February 2010 (A.S. XLIV).

In February 2010 Sir William MacBrennan travelled from the noble Shire of Harpelestane and became the first Prince accompanied by his lady Mistress Æringunnr Yrsudóttir.

In 2016, ID incorporated as an affiliate organization called SCA UK, which administers membership for all of the principality save the Shire of Klakavirki, which is instead associated with SKA (Nordmark) for mundane legal reasons, while remaining within the principality for all SCA internal matters.

The groups within the Principality are:

and a variety of semi-official subgroups with various names and designations.

Past Princes and Princesses: