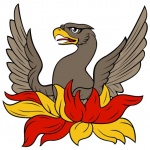 The phoenix is a bird from Greek mythology, which was consumed in flames, but rose from its own ashes.
They (or the Egyptians) believed that it lived for one hundred years, then laid an egg, which it then hatched by immolating itself.
This is (probably) also the origin of the Russian firebird legend.

In heraldry the phoenix is emblazoned as displayed and with flames by default. Modern heralds emblazon the phoenix as a demi-eagle.