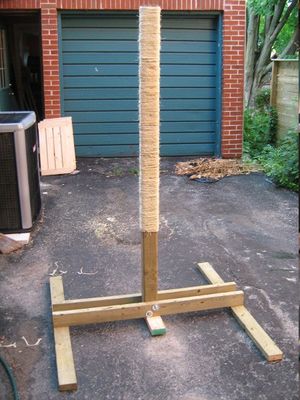 A pell is a stationary target used for practicing sword strikes. In its simplest form it is an upright post of sufficient stability to withstand repeated blows. More complex forms include "arms" and "legs", or a greater or lesser form of padding.

The pell is used to practice sword strikes, learn speed, develop accuracy and form muscle memory. Most fighters consider it an essential part of training, allowing repeated controlled strikes on an unchanging target.

In Ealdormere a rookie fighter who has poor footwork and is unwilling or unable to throw blows at his opponent is sometimes derisively referred to as "Pell".

As well as the more common standing pell, a pell may also be suspended from a chain. There are several differences with this style of pell: the supports do not get in the way of the user's feet, opening up several exercises; the pell swings when hit (which can be an advantage or disadvantage); the pell requires a place to hang, such as a pergola or sturdy tree branch; and the pell is more convenient to transport.

The simplest way to construct a hanging pell is to drill a hole through the body of the pell about five centimeters from the top to allow a sturdy bolt to pass through. The chain can attach to the bolt either side of the body. A wing nut is suggested to hold everything in place.