Difference between revisions of "Laurel"

This article primarily concerns The Order of the Laurel within the SCA and its historical equivalents. For the herb see bay tree. For the Society Officer see Laurel Sovereign of Arms. 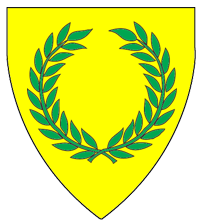 The symbol of the laurel wreath was traditionally given to scholars, artists, athletes and soldiers in Ancient Greece as symbols of excellence. This symbolism is still with us today with the word Baccalaureate or laurel-berry, as a title for people who, for example, have completed a bachelor degree at university.

Laurus nobilis, also known as Bay-Leaves was used in the middle ages as incense and cooking.

Laurels in the SCA

In the SCA, "Laurel" normally refers to a member of the Order of the Laurel. Entry into the Order is awarded to those who excel in Arts and Sciences, and pass on knowledge to others. These people may also judge Arts and Sciences competitions, make recommendations to the Crown on who should be admitted to their Order, and are expected to be examples of courtesy and chivalrous conduct. A Laurel may take apprentices and train them to a high standard, often in a field similar to their own area of expertise.

Members of the Order of the Laurel may choose to swear fealty, but are not required to do so. The candidate must have attained the standard of excellence in skill and/or knowledge equal to that of his or her prospective peers in some area of the Arts or Sciences. The candidate must have applied this skill and/or knowledge for the instruction of members and service to the kingdom to an extent above and beyond that normally expected of members of the Society.
The duties of the members of the order are as follows:

Becoming a Laurel (or any type of peer) takes about ten years of dedicated work, on average.

A Laurel is addressed with the title of Master or Mistress, and may use the symbol of a laurel wreath. Some Laurels who have sworn fealty to the Crown also wear a Chain of Fealty .

Masters and Mistresses of the Laurel may append their names with the letters "OL" (e.g. Caryn von Katzenberg, OL).

The head of the SCA College of Arms is known as Laurel King/Queen of Arms (or "Laurel") but this title is unrelated to the Order of the Laurel.

The use of the laurel wreath in SCA heraldic devices is restricted to official SCA groups.

The Lochac Order of the Laurel have a web page: http://www.sca.org.au/laurels .