Difference between revisions of "Jug" 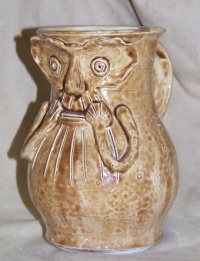 A jug is a vessel designed to hold liquids and allow them to be distrubuted in smaller amounts. The amount it held could vary and they were frequently made of leather or pottery and later in the medieval period, pewter. Jugs of bronze, silver, etc were also used but were not common during the medieval period.

A jug can have a lip for pouring, is open topped and can be decorated.