Difference between revisions of "Hood" 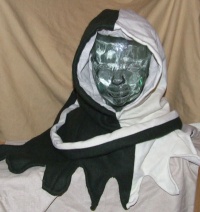 Hoods were worn on the head by all levels of the population. They ranged from small hoods that just covered the head and neck, to large hoods with dagging, braiding and other decorations that covered the entire shoulders with long tips behind the head. Unless the hood's width is wider than the shoulders then any rain that falls upon it is directed onto the shoulder (think too small an umbrella). Some included a liripipe.
One version of fashion history says that, later, hoods were used to create hats, by placing the face-hole round the brows, wrapping the hood fround the head, and securing the whole with the liripipe and (possibly) a brooch.

Hoods were made from wool and can be lined in linen. They can often be found in combination with a cloak which provides good cover in inclement weather.

Hoods have been found from the Dark Ages onwards.

Hoods were also used on birds for falconry. These hoods cover the eyes and most of the head of the bird so as to blind it and keep it calm. The hood is removed from the hooded bird just before it is released to fly.