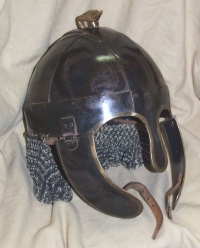 The helm or helmet is the armour that covers the head.

There are many different designs of helm through the years. Some general descriptions are:

General soldiers used simpler designs than those described above for the higher ranked warriors.

The helm may be attached to mail or a gorget to protect the neck. A coif is often worn under the helm.

Heraldic helms appear, by heraldic convention, above a device's shield as a signifier of the owner's rank. Helms can also appear as charges within devices.

In the SCA, a helm needs to be constructed of at least 16 gauge steel* to be legal for use in heavy or light combat. Protection needs to be extended down the back and sides of the neck (therefore strictly period Norman helms need certain modifications) and the face must be completely covered, if only with a hockey-helmet style grille or bar grill. This protection must extend down to meet the throat and spinal protection of the gorget.

For further details, consult your kingdom's combat handbook. Bars or grilles are to be placed across any openings large enough to admit a 1-inch diameter rattan weapon.

Normal helms are not standard in SCA fencing but head and face protection is still required. Helms can be used provided they meet all the minimum requirements according to the SCA fencing rules.

Reenactment helms are styled after historical examples and do not include the bars found on SCA helmets.