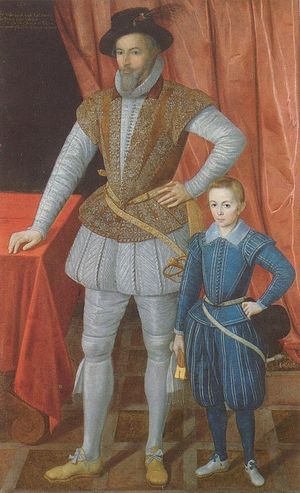 Most ordinary people wore clothes similar to those of the rich and fashionable people but they were simpler and made from cheap materials like wool or linen. Children were usually dressed in smaller versions of their parents' clothes, although a portrait of Sir Walter Raleigh with his son shows Raleigh wearing a ruff, whereas his son wears the wide collar that was to become popular after the death of Elizabeth.

Rich Elizabethan women wore a lot of clothes each day. They wore a thick petticoat. Over this went a corset and a skirt. The skirt was held up by hoops and/or padded at the hips. An outer bodice and skirt or a fine dress went over this and on top of that there was a dressing gown or coat, which went down to the floor.

Rich men wore a linen shirt and a tight-fitting jacket called a doublet. Over there was another jacket which came out over the hips. They wore stockings and padded breeches instead of trousers. Most wore a velvet or fur hat.