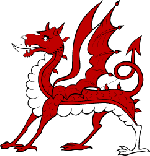 It is usually shown rampant, statant or passant, and rarely displayed like an eagle.

Wingless dragons exist in English folk-lore: often they are alternatively referred to as wyrms. The wingless variety seen in German heraldry is called the lindwurm.

There are also dragons in Chinese, Korean and Oriental heraldry. These dragons have no wings, and a varying number of toes. Only the dragons used by the Emperors of China and Japan were permitted to be depicted with five toes; this is comparable with the Roman and Byzantine practice of restricting poryphyry to any but the Emperor, or the medieval European practice of reserving ermine to the nobility.

Dragons are common in SCA heraldry, but it is a requirement that Oriental dragons be depicted with 3 toes or fewer.

A dragon passant vert appears on the arms of the Midrealm.

In SCA heraldry, dragons are considered the same as wyverns. In fact, wyvern is the more common form of the beast in period heraldry, especially in early heraldry.