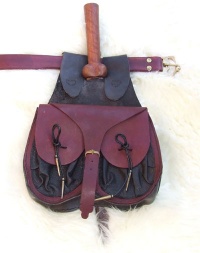 Hilts of earlier daggers were simple and might be of the bollock type (having a guard that resemble testicles), rondel type or others. Renaissance dueling daggers might have curved quillions, broad hand guards, elaborate basket hilts or other furniture resembling a sword. These types of daggers have become commonly known as a Main Gauche. This basket hilt was placed slightly different to basket hilts on swords as the guard would often be symetrical and on the face of one side of the sword rather than the edge.

Blades varied (between times and cultures) to encompass from the stiletto -- thin and needle-shaped -- to the cinqueada, almost five-fingers broad (hence the name) at the hilt, which reduces down to a point quite quickly. [Interestingly (or not) both of these originated from Italy.]