Difference between revisions of "Cup" 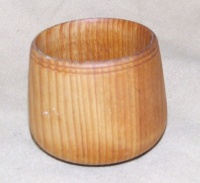 A cup is a drinking vessel that is roughly as high as it is wide, although this definition is rather arbitrary. Historical cups could be made of pottery, wood, horn, glass or precious metals such as silver with the former three being much more common than latter even in rich households.

A cup is also North American and Australian slang for the plastic insert in a jockstrap. In Britain and Australia, this is also known as a (cricketer's) "box".