Difference between revisions of "Clove" 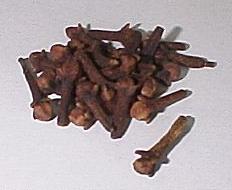 As a spice, cloves (from the Latin clavus meaning "nail") refer to the dried flower buds of the Clove tree (Syzygium aromaticum), native to Indonesia. They were imported to Europe from Roman times, possibly even earlier. They became popular in Europe from the 8th century.

Cloves were not able to be cultivated in Europe so they were a valuable trade item. Magellan's journey which cost him 4 of his five ships and all but 18 of his original 250 men was deemed a success as he brought back 50 tons of cloves. During the 16th and 17th centuries cloves were more valuble than gold.

During the Middle Ages it became common to stud a piece of fruit entirely with cloves. This was called a pommander. A combination of this practise and medieval kissing games lead to the SCA tradition of the cloved lemon.