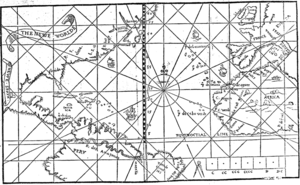 There are a few things that held back cartography in period most of which were only a problem on large scales (people could produce good maps of a town or the local area but not of an entire continent). Large scale maps of what was known of the world were not often seen and the belief that the world was flat didn't help much.

Maps of the World

The most common form of map in the Middle Ages was the T-O Map, so called because the maps looked like an "O" with a "T" inside, partititioning the map into the three continents.

The map was oriented such that the east appeared on top, with Asia representing half the land mass. Europe appeared on the bottom left, and Africa the bottom right. In a eclesiatically important point, Jerusalem was situated in the centre of the map. Of the three lines partitioning the continents, the Mediterranean separated Europe from Africa, the Nile separated Africa from Asia, and the river Don (which in fact has its source south of Moscow) separates Europe from Asia.

One of the few advantages of the sacking of Constantinople was that the fleeing educated classes brought with them valuable books, which were then disseminated throughout Europe.

The book Geography by Ptolemy was one such book, and it was to become one of the most popular books of the 15th Century. In this book Ptolemy gives scientific evidence for a spherical Earth, gives a calculation for its size, and contains maps based on these theories. In the end though, Ptolemy's calculation for the size of the earth is too small, which is why Christopher Columbus thought he was in India when he was in the Carribean.