Difference between revisions of "Boar" 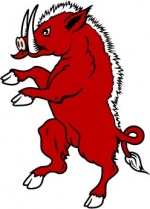 A boar is a male pig.

See also (in some cases in the SCA) stickjock

The boar's head was often served in English feasts, along with the great flesh in the first course. The flesh of the boar was called brawn, and was sometimes served with mustard or other sauces. Brawn was also served "broken" or "brisee", or cooked in lechemetes. In Anglo-Norman it is called "singler", another name by which it appears in menus.