Difference between revisions of "Aviculture" 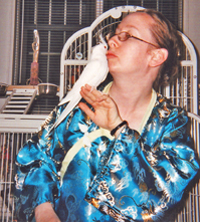 Aisin Biya's cockatiel, Mithril, is a rare whiteface lutino (aka albino) mutation. The genetics involved in producing an albino (almost exclusively hens) cockatiel mean that birds like Mithril can only exist in aviculture.

The history of parrot aviculture in Europe officially begins with Alexandre the Great's expeditions to India in which he encountered and brought back three species of psiticula parakeet: the Indian ringneck, the plum headed, and of course the Alexandrine parakeet. Based on the records of Alexandre's journeys, it is clear that in Asia, the art of aviculture had extended to parrots some time before--natural as there are many species native to India. Specifically, the Indians had/have a cultural tabboo against eating parrots, seeing them as a class of bird worthy of special protection. Like all psiticula parakeets, the birds brought back to Europe for aviculture were/are predominently green in color with a long tail. The three aforementioned species have a collar of contrasting color around the base of the head. In Roman times, the black collar of the Alexandrine parakeet suggested subservience to humans, ordained by the gods (later the Christian god as well). This proved to be the beginning of many inhumane attitudes towards parrots that were accepted without question by medieval europeans.

In fact it was not until August, 2006 when Aisin Biya of the Canton of Brokenbridge in Ostgardr East Kingdom started the Company of Medieval Aviculturists that the ancient and highly popular art finally reached the SCA. This effort sprang from Biya's increasing awareness that most SCAdians, as well as the general public, know precious little about aviculture.

Encouraged by falconry laurel, Mistress Brianna, Biya began researching medieval aviculture in July, 2006. On August 14th, following a demo at which both bird gentles assisted, Aisin Biya founded the Company of Medieval Aviculturists as a way of promoting the art of aviculture and the arts and sciences contained within that art.