From Cunnan
(Redirected from Pippins Pictures)
Jump to navigationJump to search 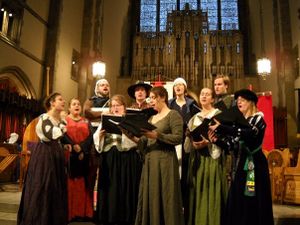 The Pippins is an SCA madrigal choir from the Incipient Barony of Ayreton (Chicagoland area) in the Midrealm (the Midwest) that performs mostly pre-17th century madrigals, motets, rounds, and carols. The Pippins were founded in 1996 and have been rehearsing and performing regularly since then.

The Pippins have received the Order of the Grove (arts award)and the Award of the Purple Fretty (service award), and have taken 1st place in numerous Arts and Sciences competitions.

The Pippins perform primarily at SCA events, but also perform at Christkindlmarkt in Chicago and the Bristol Renaissance Faire in Wisconsin, and are always looking for additional venues for performance.